While salinity or salty water, is generally used to describe and measure seawater or certain industrial wastes, the term total dissolved solids (“TDS”) is typically used to describe water high in various salt compounds and dissolved minerals. While one could have very high total dissolved solids, and very low salinity from a chemistry standpoint, here we are talking about high TDS with high levels of salts.

Total Dissolved Solids (TDS) refers to the amount of dissolved solids (typically various compounds of salts, minerals and metals) in a given volume of water. It is expressed in parts per million (also known as milligrams per liter) and is determined by evaporating a small amount of water in the lab, and weighing the remaining solids. Another way to approximately determine TDS is by measuring the conductivity of a water sample and converting the resistance (in micromhos) to TDS.

TDS in municipally-treated waters in our area range from 90 ppm to over 1000 ppm. The most common range on city water is 200 – 400 ppm. The maximum contaminant level set by USEPA is 500 ppm.

The higher the TDS, the less palatable the water is considered to be. Sea water ranges from 30,000 to 40,000 ppm. Many brackish ground water supplies contain private well water with a TDS of 1500 – 5000 ppm. In some cases the levels exceed 7000 ppm. Generally, one wants a TDS of less than 500 ppm for household use.

In our experience, it appears that folks can tolerate for general household use, soft clean water with a TDS of up to 1500 ppm. When the levels start to exceed 1500 ppm, most people start to complain of dry skin, stiff laundry, and rapid corrosion of piping and fixtures. White spotting and films on surfaces and fixtures is also common at these levels and can be very difficult or impossible to remove.

TDS affects taste, and waters over 500 – 600 ppm can have an alkaline taste.. When the levels top 1500 ppm, most people will report the water tastes very similar to weak alka-seltzer.

TDS is removed by distillation, reverse-osmosis or electrodialysis. Increasingly most desalination projects, both large and small are accomplished with reverse-osmosis. Depending on the water chemistry, reverse osmosis systems are the most popular, given their low cost and ease of use. For point of use, at one faucet, distillers work very well also, and produce very high quality water, but require electricity and higher maintenance than reverse osmosis systems.

Get help in selecting a desalination system

Test your well water for TDS. 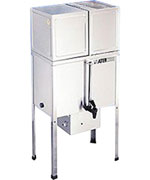 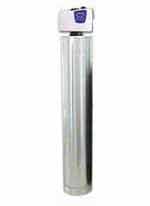