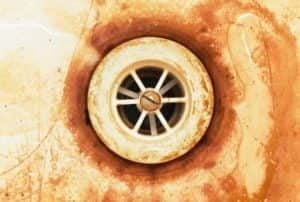 Does your well water cause pink, red, brown, black, or blue stains to appear on your fixtures or appliances?

Unsightly stains can show up on fixtures, appliances, or when washing laundry as well as your hair. These stains show up generally as pink, rust or reddish, black colored, dark brown, and green stains.

Pink stains that appear in the toilet are not uncommon on well water or city water that is low in chlorine.  However, this is not caused by the water itself, rather it is caused by airborne bacteria.  Keep the toilet cleaned often with a small amount of bleach to eliminate this problem.

Red or rust stains: Iron is one of the most common elements in the Earth's crust and is found ground waters worldwide. The maximal contaminant level (MCL) established by USEPA guidelines is 0.3 parts per million, also known as 0.3 milligrams per liter of water. When it comes to concentrations higher than 0.3 ppm, iron in well water can cause staining of fixtures and clothes, and give the water a bitter or rusty taste.

Iron is usually found in a dissolved (clear with no color) state in well water, and the water may appear crystal clear whenever first used. After exposure to oxygen, or after the addition of oxidants (such as chlorine bleach or hydrogen peroxide), this ferrous iron will be oxidized (“rusted”) to the ferric form to form insoluble particles. The well water then looks reddish, orange colored or even yellow, or in the situation with manganese, black or brown. This may happen in toilet flush tanks and inside your clothes washer or even dish washer. An iron analysis will tell you if this is the cause of the stain and just how much iron is in the well water.

Light brown or tea-colored stains: Usually caused by manganese. Manganese is also a common component in the Earth's crust and is also found in many ground waters. Manganese is not generally regarded as  toxic, however some research has shown it causes stomach upset and diarrhea when it comes to levels over 0.05 ppm. The maximum contaminant level (MCL) set by EPA standards is 0.05 parts per million, at times labelled as 0.05 mg per litre (mg/L) or 50 micrograms per liter (ug/L).

In concentrations higher than 0.05 parts per million, manganese in water can cause discoloration of sinks as well as clothing, and give a sour, asphaltic or greasy flavor to water. Manganese is frequently found in a dissolved form in  waters, and the water may appear clear when first used. After exposure to air, or following the addition of oxidants (including chlorine bleach or ozone), the clear  manganese will be oxidized (“rusted”) to produce solid particles of manganese oxide. The well water then can look , dark brown, or black while having an oily surface or appearance. This can happen in toilet flush tanks and in the washing machine or dishwasher.

Tannins found in water by organic material from decaying plant life can also leave tea-colored staining and light brownish streaks in your washing. Have the water tested for tannins as well as iron and manganese..

Black staining: This can be brought on by iron sulfides that are formed through the combining iron and sulfates in water. This is most typical in water that has a strong sulfur smell. This can also be caused by manganese and/or manganese sulfides. Analyze for iron, manganese, sulfates, and hydrogen sulfide to determine the cause of dark-colored staining.   High concentration of manganese also causes black deposits and staining.

Blue staining: It begins with blue staining on your fixtures and tubs. You may notice laundry washing spotted with light blue, and the drinking water may have a bitter taste. Eventually the copper pipe corrodes and then you begin to see pinhole leaks. These problems are caused by your copper pipes corroding.

Copper water pipe deterioration is often caused by water that is lower on the pH scale, which means acid well water. It may also be brought on by water which is high in pH and total dissolved solids. These complications can be easily fixed only if you can correctly determine what the water chemistry is first. To identify this problem,analyze for pH, alkalinity, hardness, total dissolved solids, and copper. Once you have these numbers  a Langelier Saturation Index, or LSI calculation can be carried out, and help identify if the water is corrosive.