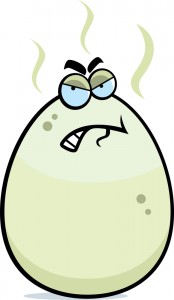 Such water can discolor coffee, tea, and other beverages, and alter the appearance and taste of cooked foods. Hydrogen sulfide (“H2S”) gas is a nuisance that is not usually a health risk at concentrations normally found in household water.

Hydrogen sulfide can be toxic. Usually, the gas can be detected long before it reaches harmful concentrations.

H2S is flammable and poisonous. While such concentrations are not common, if gases are released in a confined area, they could cause nausea, illness, and in extreme cases, death.

H2S dissolved in water can corrode plumbing metals, such as iron, steel, copper, and brass and exposed metal parts in washing machines and other water-using appliances.

The corrosion of iron and steel from hydrogen sulfide forms ferrous sulfide or “black water” which can darken silverware and discolor copper and brass utensils. Hydrogen sulfide can also interfere with the effectiveness of water softeners and filter systems.

Iron bacteria and sulfur bacteria present in groundwater use iron and sulfur as an energy source and chemically change sulfates to produce H2S gas.

These bacteria use the sulfur available from decaying plants, rocks, or soil and often thrive in an iron-rich environment.

The harmless non-toxic bacteria normally exist in oxygen-deficient environments, such as deep wells and plumbing systems.

The bacteria do not usually cause health problems, but contribute to bad tastes and/or odors at low levels.

Run a hose bib or tap as close to the well as possible and fill a 5- gallon bucket or other container and notice if there are odors. If you smell a “rotten egg” odor, this is hydrogen sulfide gas.

Changing the anode rod to an aluminum-zinc rod can often solve this problem. It is recommended that you drain your water heater at least once per year.

This will flush out sediment that may accumulate in the bottom and give you an idea of the sediment type and color, if any, are present.

To learn more about odors and what may be causing them, visit our Odors page, or read our guide on “How To Treat Sulfur Odors In Well Water”.

If you have questions, don’t hesitate to e-mail us at [email protected], leave us a message on Facebook, or use our online contact form for prompt, personalized assistance from our trained professionals.  Thanks for reading!