The presence of bacteria in well water (as well as spring and rainwater systems) is a common occurrence.

According to the USEPA, coliform bacteria are common in the environment and are generally not harmful. However, the presence of these bacteria in well water or spring water usually indicates that the water may be contaminated with germs that can cause disease.

E. coli is a type of fecal coliform bacteria commonly found in the intestines of animals and humans. E. coli is short for Escherichia coli. The presence of E. coli in water is a strong indication of recent sewage or animal waste contamination. Sewage may contain many types of disease-causing organisms.

E. coli comes from human and animal wastes. During rainfalls, snow melts, or other types of precipitation, E. coli may be washed into creeks, rivers, streams, lakes, or groundwater.

When these waters are used as sources of drinking water and the water is not treated or inadequately treated, E. coli may end up in drinking water. Other types of bacteria can be found in well water also, such as slime and odor-producing iron and sulfur bacteria.

If you draw water from a private well, and your well tests positive for E. coli, there are several steps that you should take:

How to Shock Chlorinate & Sanitize

A well should be chlorinated and sanitized whenever:

Read our Guide:  How to Shock Chlorinate Your Well to Eliminate Bacteria

Identify the Source of the Contamination

If the contamination is a recurring problem, try to identify the source of the problem (such as a defective well seal, or cracked casing) and fix it. 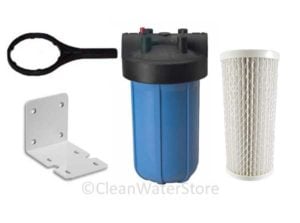 You can also investigate the feasibility of drilling a new well or install a disinfection unit, which can use chlorination, ultraviolet light, or ozone to kill bacteria and viruses.

As a final precaution use a special type of bacteria cartridge to remove bacteria prior to drinking or bathing, after chlorination, UV or ozone.

Chlorination is highly effective provided there is sufficient contact time after the chlorine has been injected.   Peroxide injection for chlorine is not typically used for disinfection.

How to Remove Bacteria in Well Water

What to do if when you find bacteria in well water?

Identify the source of bacteria and fix that first, stop the contamination if possible, before considering treatment applications.

Here are the most common cost-effective ways to treat bacteria in well water:

Chlorinator –  Use a chlorine injection with contact tank, followed by a bacteria filter or ultra-filtration system. 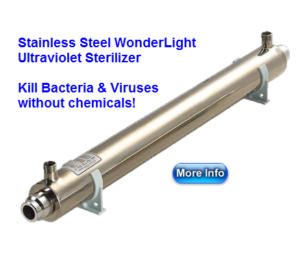 Ultraviolet Light –  if your water is clear and low in minerals, use a UV sterilizer, followed by a bacteria filter or UF system.  Install a water softener if the water is high in hardness ahead of the UV sterilizer.

Ozone System –  as an option to chlorine, use an ozone system followed by a bacteria filter.

For drinking water at point-of-use that is contaminated with bacteria, a special type of bacteria filter cartridge is recommended.

Need help selecting a system? Fill out our quick and easy Water System Designer Form and get a response in 24 hours or less.

Testing for Bacteria in Well Water to Safeguard Your Water

Test your private well annually for total coliform bacteria, nitrates, total dissolved solids, and pH levels. If you suspect the presence of other contaminants, you should test for those also.

You can also contact your local health department to find out what substances may be common in your area’s groundwater.

You may want to test more frequently if small children or elderly adults live in your house or if someone in your house is pregnant or nursing. These segments of the population are often more vulnerable to pollutants than others.

You should also test your private well immediately if:

In addition, well owners should also determine if the groundwater you rely on for household use is under direct influence from surface water.

Groundwater under the direct influence of surface water is susceptible to contamination from activities on the surface. Direct influence is determined on a site by site basis under state program criteria. To find a state agency to contact, please click here.