Corrosion of piping, appliances, and fixtures in the U.S. has been estimated to cost the public hundreds of millions of dollars per year in direct costs. Corrosion also can cause adverse health effects.

Lead and cadmium are both toxic metals that occur in tap water almost solely due to corrosion. Three other metals, usually found in high concentrations due to corrosion of piping systems are copper, iron, and zinc.

Sources of Corrosion
Corrosion can be caused by complex factors and in many cases, the source is hard to identify. The main causes can be divided into physical erosion, chemical corrosion, stray electrical currents, and improper plumbing installation, usually involving copper pipes.

Physical Erosion
Physical erosion is caused by physical factors such as high water velocity through an under-sized pipe, high temperatures, and/or sand or grit in the source water. The pipe is literally worn away, causing pipe failure.

This type of corrosion is easy to identify by cutting the pipe open, cleaning the pipe surface, and observing etching and gouges in the pipe.

Physical erosion can be stopped by repiping with larger diameter pipes, installing sand strainers or filters to remove sand or grit, and/or by lowering the temperature of the water depending on the application. For instance, recirculating hot water piping loops can sometimes be the cause of a piping failure if improperly designed.

Physical erosion can be stopped by repiping with larger diameter pipes, installing sand strainers or filters to remove sand or grit, and/or by lowering the temperature of the water depending on the application. For instance, recirculating hot water piping loops can sometimes be the cause of a piping failure if improperly designed.

Chemical factors include low pH (acidic water, less than 7.0, but typically in the range of 4.0 to 6.5), low carbonate alkalinity, high oxygen content, high total dissolved solids, and/or high chloride or sulfides. On private well water systems, the most common cause of corrosion is from acidic waters.

Often these waters are low in minerals and salts and contain high levels of carbon dioxide. Carbon dioxide in water forms carbonic acid, and with insufficient calcium or magnesium present to buffer the acid, the water turns acidic causing corrosion of pipes and fixtures.

Carbon dioxide in water forms carbonic acid, and with insufficient calcium or magnesium present to buffer the acid, the water turns acidic causing corrosion of pipes and fixtures.

Signs of acid water are corrosion of fixtures, pinhole leaks in plumbing, and blue staining (from copper pipes) or rust staining (from iron pipes). Often these waters are great for drinking or household use, but are low in buffering calcium minerals, and contain dissolved carbon-dioxide gas, which can cause a low pH and acid condition. Without treatment, these waters can become contaminated with copper, lead and other metals from piping,

Without treatment, these waters can become contaminated with copper, lead and other metals from piping, fixtures, and appliances, turning good water into contaminated drinking water.

Treatment is accomplished by neutralizing the water with the use of an automatic neutralizer filter. These water filter tanks are filled with a blend of calcium and magnesium carbonates made from naturally occurring minerals, which dissolve into the water, making it less corrosive.

More mineral can quickly and easily be added to the filter tank, typically once per year for most residential applications. No special tools are required. This type of neutralizer also acts as a filter removing sediment and small amounts of iron.

In some cases, instead of dissolved carbon dioxide causing the low pH or acidity, the acidity is caused by mineral acids, either natural or from mining or other industrial wastes. Often the pH is less than 5.0. Treating this type of water requires using a soda ash feeder, and in some cases injection of sodium hydroxide.

Corrosion inhibitors such as orthophosphate are very effective at reducing corrosion in copper piping systems. These are particularly effective after balancing the pH to 6.5 to 7.5 range. In some cases, the total dissolved solids need to be reduced in addition to using phosphate injection.

Stray Electrical Currents
Stray electrical currents can cause corrosion under certain conditions. Typically AC current is not a problem, but DC current from motors, security alarm systems, and other appliances can leak into piping systems.

Proper grounding of the water pipes, and removing the offending source of the stray currents is the solution to this problem. In some cases, household piping systems do not have proper electrical continuity, meaning the piping is separated by some sort of non-conducting material.

Improper Handling or Installation of Piping
Copper corrosion is frequently caused by the improper installation of copper pipes. Copper pipe that has not been properly stored prior to installation and improper handling can cause problems later.

This causes turbulence and increased velocity which leads to corrosion. Another common problem involving poor workmanship with copper pipe involves the use of excess flux. Flux is a chemical cleaning material that allows the copper pipes to be properly soldered together. When used in excess amounts, corrosion of copper results by etching the pipe and allowing corrosion to develop. The solution to improper installation of copper pipe is to remove the sections that were installed improperly and install new pipe using proper technique.

A common type of corrosion is bimetallic corrosion. This occurs when two metals, with different electrical potential, are in electrical contact with each other while immersed in liquid.

For most residential and commercial applications, this occurs when the copper pipe is joined with a galvanized iron pipe. This is a sign of poor workmanship, and the solution is to use a dielectric union, so the two metals do not come in contact with each other.

Fill out our quick and easy Water System Designer Form and get a response in 24 hours or less.

Want to find out how corrosive your water is?

Testing your water for corrosion.

Link to USEPA that discusses lead and copper in drinking water https://www.epa.gov/safewater/lcrmr/index.html 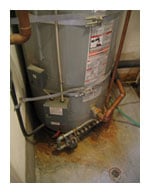 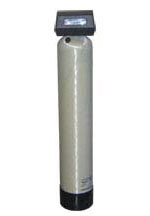