Sulfur or “rotten-egg” odors can develop in water heaters and in corroded iron piping even if the water is chlorinated city water. This usually occurs if the water has a low chlorine residual, high levels of sulfates, and/or the water has sat inactive for days or weeks.

Odors Are Often Caused by Bacteria 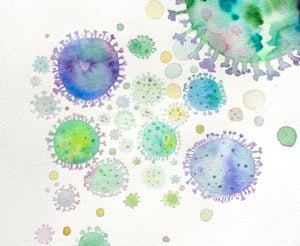 The incidence of rotten egg odor or black water in water lines is due to the reaction of sulfates and microorganisms in the water, this can cause hot water tank or water heater smells. To determine the source of the smell, it is important to check to see whether the cold water contains odor or just the hot water.

City water is usually chlorinated, which kills odor-causing bacteria. However, in some cases, the chlorine residual may be very low, particularly if your house is at the end of the distribution system and far away from where the chlorine is first injected at the water treatment plant. If you run your cold water and notice an odor, it's best to call your local water utility and report the problem.

Even though the water entering a pipeline from the city water treatment plant can be free of odor, the water may develop odors directly in the distribution line. This can be caused by old iron distribution systems that provide an environment for the sulfate bacteria to grow. Increased bacterial growth depletes both the oxygen and the chlorine residual in the piping. By the time it reaches the house it can be free of chlorine residual and odors can easily develop.

Odors can develop even in cold water piping in the home, especially in galvanized iron piping. Often iron piping in the house is of older age and can be corroded, providing a good environment for the bacteria to grow and odors to develop. If there is an odor in the cold water, and the source is chlorinated city water, it is best to trace and see if the piping is iron piping, and then replace it with copper.

As the first step to this process, you can add hydrogen peroxide or chlorine bleach to the piping and sanitize it. If the smelly water returns, it may be necessary to replace the old galvanized iron pipe with copper piping.

(If you want to read more about water heater odors, check this post out) 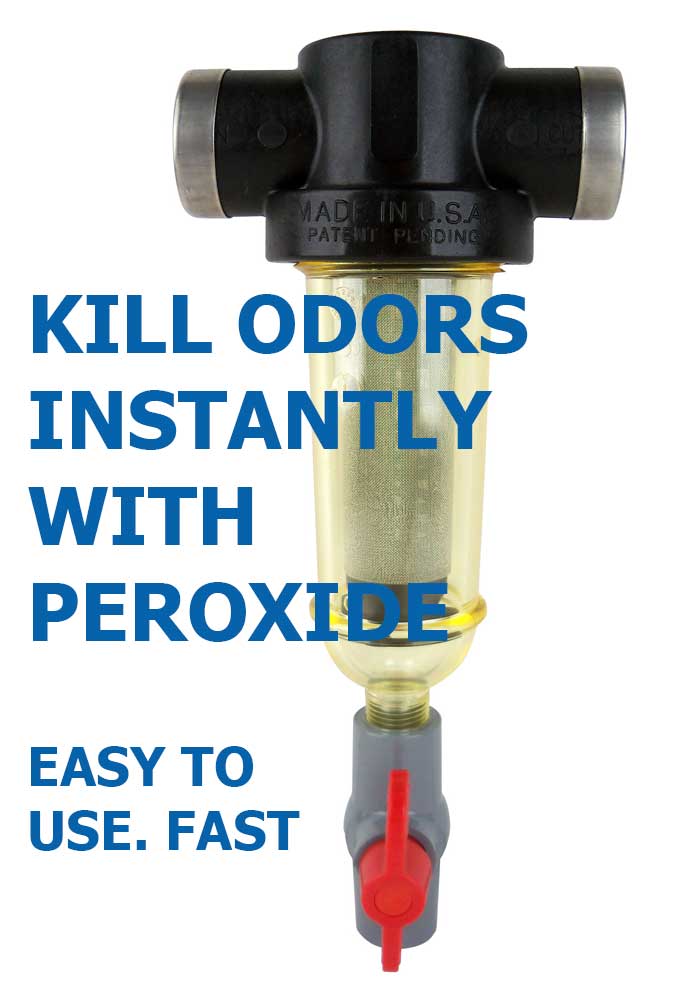 Almost all water heaters have “anode rods” which in a cathode-anode reaction, produce excess ions that wear off the anode rod and adhere to the inside glass lining of the heater, preventing corrosion. The greater the activity of the anode, the greater the amount of hydrogen ion and hydrogen sulfide gas. If the cold water does not contain odors, but the hot water smells bad, then a thorough sanitizing of the water heater tank with 1 to 2 pints of store-bought hydrogen peroxide will eliminate the odor and smell from the water heater.

Procedure for Sanitizing of Hot Water Heater: How to put Hydrogen Peroxide into Water Heater 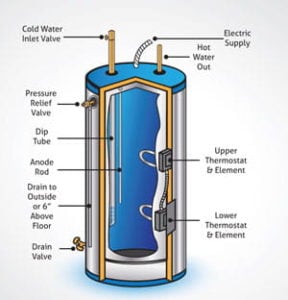 1. Turn off the manual switch if the water heater is electric. For gas heaters, turn the control to Pilot. Make sure the pilot is still lit so you can restart the water heater when the procedure is completed.

2. Close the cold water inlet valve at the water heater.

3. Open a nearby hot water faucet and the T&P (temperature and pressure valve, located on the top of the water heater) valve to relieve tank pressure. Note of caution: T&P valves may need replacing if defective or old. 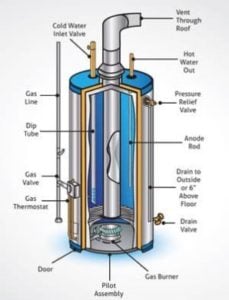 6. For best results and to preserve the life of your heater, inspect the anode rod. If corroded, replace it with a new aluminum/zinc anode rod, which will create fewer odors. Figure 3 Typical gas water heater cut-away showing anode rod and cold water dip tube.

7. Add 1 to 2 pints of 3% hydrogen peroxide (the kind typically found at drugstores) for every 40 gallons of water heater tank capacity. This can be done by pouring the peroxide into the water heater's outlet pipe opening or into the T&P valve opening; alternatively, you can use the pre-filter screen method (seen here). Re-pipe the water heater and close the T&P valve.

8. Open the cold-water inlet at the heater and fill the tank with water. Observe the water level through the closest hot water faucet. Close the inlet valve when the tank is full.

9. Leave the peroxide mixture in the heater for 1 to 3 hours.

10. After a few hours, open the cold valve again, open all the hot water faucets and allow the peroxide mixture to clean the hot water supply pipes. Drain the remaining peroxide solution from the tank through the heater drain valve.

11. Close the heater drain valve, and completely fill the tank with freshwater. Leave the water in the tank for 15 minutes.

12. After 15 minutes, purge the hot water supply lines and drain the water from the tank through the heater drain valve, flushing out any sediment if present. Close the drain valve.

14. Check for water leaks at all fittings used; repair as necessary.

15. Turn on the manual electrical switch, or turn the gas control knob back to “On” and verify that the heater burners have lit and turned back on.

16. Check for the normal heater operation.

If the Odor Returns to the Hot Water 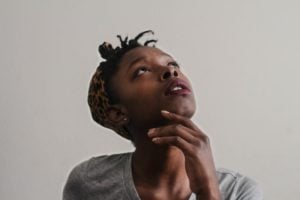 After this procedure is completed, the odor will be eliminated in almost all cases. However, if it returns within a few weeks, then the sanitizing procedure can be repeated. However, in many cases, the cold water will still have problems with recurring odors due to the continued presence of sulfate bacteria and low chlorine residuals in the water.

Other options for smelly, stinky sulfur odors in the water heater are:

1. Remove the standard magnesium anode rod and replace it with an aluminum or zinc anode rod if you haven't already.

More Questions? You can always email our technical support department at [email protected] or call us for help at 1-888-600-5426!