Health authorities strongly recommend annual coliform bacteria testing for private water wells as contamination can occur without any change in taste or odor to the water.  There are many ways that well water can become contaminated by coliform bacteria, but it is most important to test:

What Is Coliform Bacteria?

Generally, there are two categories of coliform bacteria that are found in well water, total coliform, and fecal coliform or E.coli.

Total coliforms are found naturally in the environment and are found in the soil, in water that has been influenced by surface water, and in human or animal waste. The presence of total coliform, by itself, doesn’t imply that the resource is contaminated, but it can reveal that one, if not more of the more serious types of harmful bacteria, such as fecal or E. coli bacteria, may be present.

Escherichia coli (E. coli) is the major species in the fecal coliform group and is considered to be the best indicator of fecal pollution and the possible presence of pathogens. Most coliform bacteria do not cause disease.

However, some rare strains of E. coli, particularly the strain 0157:H7, can cause serious illness. Recent outbreaks of disease caused by E. coli 0157:H7 have generated much public concern about this organism. E. coli 0157:H7 has been found in cattle, chickens, pigs, and sheep. Most of the reported human cases have been due to eating undercooked hamburger. Cases of E. coli 0157:H7 caused by contaminated drinking water supplies are rare. 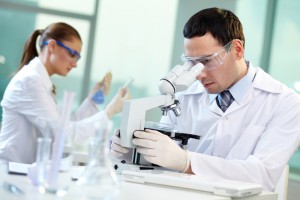 What Should I Test For?

Testing for bacteria is the only reliable way to know if your water is safe. You cannot tell by the look, taste, or smell of the water if disease-causing organisms are in it. It is recommended that well owners test their water for coliform bacteria at least once a year and more frequently if bacteria has been a problem in the past.

Frequently, concentrations of pathogens from fecal contamination are small, and the number of different possible pathogens is large. As a result, it is not practical to test for pathogens in every water sample collected. Instead, the presence of pathogens is determined with indirect evidence by testing for an “indicator” organism such as coliform bacteria

Which Test Kit Do I Need?

The at-home test is an easy, fast, and effective method for determining if your well water has coliform and E.coli or not. When using this simple test the media turns blue-green in the presence of coliform bacteria.

When using this simple test, the sample turns blue-green in the presence of coliform bacteria, but E. coli growth is confirmed by blue fluorescence under UV light. Simply shine the UV light on the sample to see if E.coli is present.

For more extensive or state required testing (such as applying for a new daycare center license) we recommend the Watercheck which offers Professional EPA-certified laboratory results available for the fraction of the cost of regular laboratory testing.

How Do I Collect a Water Sample For The WaterCheck?

On the requisition form, write down if this is a re-sample. You also need to fill out section A (Drinking Water) and add any comments or special requests at the bottom of the requisition.

Note: Samples must be collected from the cold water supply line. do not:

When Should I Test and How Often?

Late spring or early summer are the best times to test your well, since coliform contamination is most likely to show up during wet weather. Whether your test results are positive or negative, understand that the sample you collected is just a “snapshot” of your well’s water quality. The more samples you have tested, the more confident you can be about the quality of the water you are drinking.

What Do The Results Mean?

What Should be Done if Coliform Bacteria are Detected in Your Well?

If E.coli or fecal coliform are detected in the drinking water, the first step should be an emergency chlorination, which can last two to five days. At the same time a system is being disinfected, it is recommended to vigorously boil the drinking and cooking water for one minute before using it.

It is also very important to continue testing the water because if anything happens to the chlorine residual, or if the chlorine-demand changes and the consumer doesn’t know about it, the water can become unsafe again. However, If fecal coliform or E. coli are detected in well water, the first step should not only be to disinfect your system but to identify the source of your bacteria contamination.

What Kinds of Defects Can Allow Contamination?

Long-Term Options for Dealing with Bacterial Contamination of a Well

For more help on removing bacteria from your water, visit our Bacteria page on our Water Problems tab.

If you still have questions, don’t hesitate to e-mail us at [email protected], leave us a message on Facebook, or use our online contact form for prompt, personalized assistance from our trained professionals.  Thanks for reading!